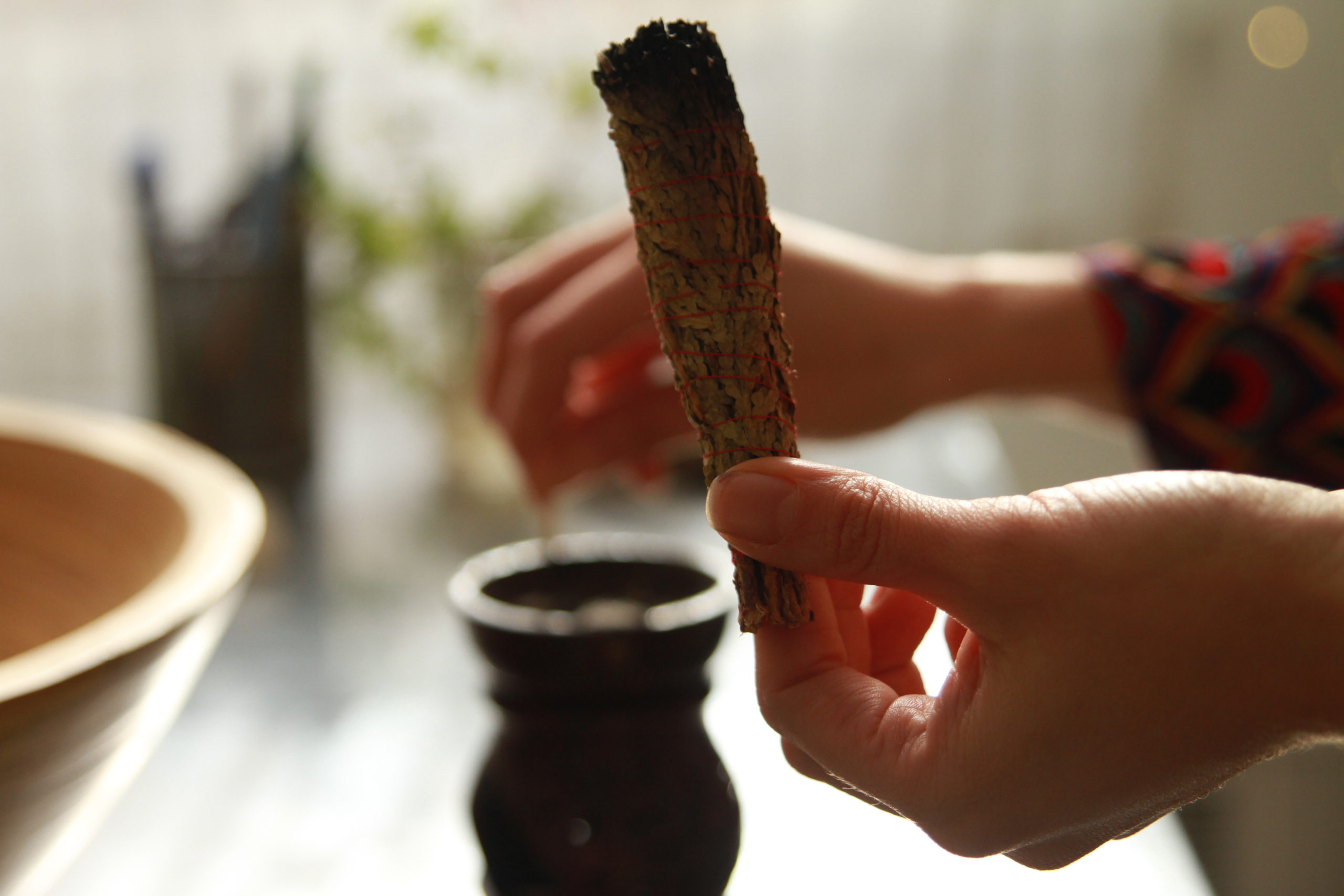 The word “smudge” is technically a colonial word. It is more accurate to call it Cleansing or Purifying.

The act of “smudging” is first documented by colonizers. This caused many to view it as a “woo woo witch doctor sham“. Nevertheless, many different indigenous groups around the world use bundles of herbs to clean a room or person. They each have their own name for the cleansing herb ritual. As well as their own geographically selected herb bundle and their own reasons for using each selected herb.

Herbs to Smudge Yourself

The most used cleansing herb is White Sage, Salvia apiana. According to the United Plant Savers is on the watch list for going extinct. Most recently, Palo Santo from South American also started to get popular and also said to be over harvested. There are alternatives we can all use like Mugwort, Cedar, Rosemary and Pine. The truth is cleansing herbs are based on the plants that grow around you, not what you can get online. So its best to use the ones native to where you live and EVEN better, grow them!

Politically speaking, Canada, in an attempt to redress historical practices of assimilation, have established policies that support Indigenous traditions. Specifically allowing public schools to offer cleansing herb practices to their majority indigenous student body. As well as allowing the use of cleansing herbs in public spaces or even your own rented apartment.

Does Smudging Yourself Work?

YES, results from a clinical study on “mixtures of odoriferous and medicinal herbs” show the positive effects when you smudge yourself. The published study in the US National Library of Medicine National Institutes of Health concluded that:

“using medicinal smoke, it IS possible to completely eliminate diverse plant and human pathogenic bacteria of the air within confined space.”

What they observed was the cleansing herbs purified and disinfected the air by a 94% reduction of the airborn bacteria. It also had the ability make the environment cleaner for up to 24 hours in a closed room.

This is a great example of “modern western science” catching up with indigenous wisdom. Herbal blends have the same result if you use as a smoke, tea or as a cleansing herb. Blends are formulate to evoke a specific energy. Inhaling them in a spliff or while sprinkling them over a heated coal, the effects will be the same.

Best Herbal Blends to Smudge Yourself

The ones I highly suggest is CENTER for balancing the energy of a room or person. CALM for de-escalating stress. REVIVE for “cabin fever” in the winter. SYNC for inspiring creativity.