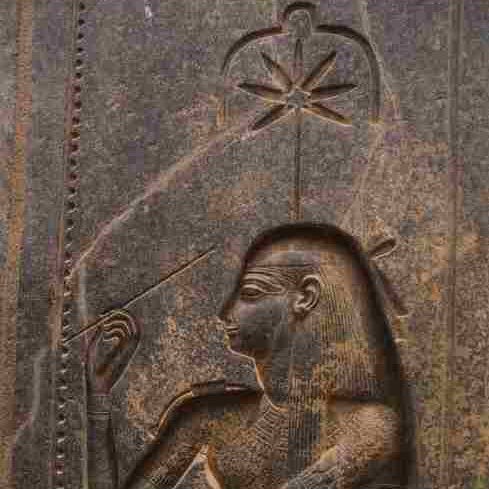 Seshat is the goddess of writing, measurement and the ruler of books.

In Egyptian mythology, Seshat was the Ancient Egyptian goddess of wisdom, knowledge, and writing. According to one myth, it was Seshat who invented writing. Her husband Thoth taught the people to write.

Seshat is depicted with a seven-pointed star above the head.¹ Her magic wand, with its seven pointed star, was the symbol which represented the source of all creative ideas, consciousness. In Egyptian mythology, Seshat was originally the deification of the concept of wisdom. She became a goddess of writing, astronomy, astrology, architecture, and mathematics.

Seshat headdress resemblance the Cannabis. The stem from the base of cannabis leaf connects to the head of Seshat. Symbolizing the link between Cannabis and consciousness.Rituals in honour of Seshat included “stretching of the cord” which some scholars say was hemp rope. Seshat Goddess opens the door of heaven for you” is referring to Hemp’s psychoactive effect.

Cannabis is a medicinal plant in ancient Egypt. The fertile delta would have supported local cultivation. Ancient Egyptian remedies include honey, crushed insects, opium and cannabis.

According to ethnobotanist Ethan Russo, the earliest mention of cannabis as an eye treatment. Celery and hemp are grounded and left overnight. Both patients eyes are washed with this mixture early in the morning.

Today, the Seshat Goddess reminds us of the importance of Cannabis as food, fiber, fuel and medicine. Have that cup of tea or toke and thank the gods for this plant.